The Volvo VNL is a truck in American Truck Simulator manufactured by the Swedish truck manufacturer Volvo.

It was first shown in an SCS Software blog post about licensing issues already before the game released and was teased and confirmed when Oregon released.[1] It was added to the game on November 5, 2018, along with the 1.32 update.

Note: Short chassis are only available for cabin 300 and long chassis only for cabins 730 and 780. 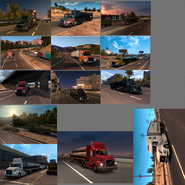