My name is Technology With Pro, or shortened as Tech, and also called by my own alternatives such as TWP and TechTWP. I am an administrator and bureaucrat of the Truck Simulator Wiki and virtual truck driver from Vermont in the United States.

Don't hesitate to ask me anything. However, I might not reply to your message on time in certain times, so just be aware of that.

My journey begins as User:GD Pro2Boss since 2018, and then I created this new account approximately a year ago since I started contributing to the Truck Simulator Wiki. A year later, I became an Administrator since February 2020, and now I am promoted as a Bureaucrat since November 2021. I am happy to help maintain and expand this community.

My history of playing SCS games

Years ago, I played a PC gaming software called WildTangent, where I started playing my first SCS Software game, and it was 18 Wheels of Steel: American Long Haul. I had fun playing it when I was a child. Then I started to play 18 Wheels of Steel: Haulin'. I was thinking it was similar to the newer copy, but then I relized that ALH reintrocuced 3 cities in Mexico, and Haulin' was released before ALH. Like about a year ago or so, I started playing Euro Truck Simulator, which however was called Big Rig Europe in WildTangent. After I stopped playing these games for a long time, I started playing Euro Truck Simulator on Steam. After a few days, I purchased Euro Truck Simulator 2 and started my headquarters in Aberdeen, Scotland as my first profile. Just a couple of months after I purchased ETS2, I then purchased American Truck Simulator on Christmas 2017 and started my headquarters in Las Vegas, NV. I had the demo first before playing the original game and started in San Francisco, CA. Today, I still play both ETS2 and ATS with all of its downloadable content purchased to my library.

Map Expansion I have

As always, I would purchase all expansion for Euro Truck Simulator 2 and American Truck Simulator. I have decided to sort these map expansions by date. Dates in bold and italic are on a day the expansion was released.

Once released, I am going to buy the following map expansion(s) that are still a work in progress:

ProMods was my last mod of 2019 to download so I can start a new profile with the mod in 2020. I have been wishing to start this for a while. Just after I started doing a few jobs, I was already in love with ProMods! However, I haven't been using ProMods for months now because I am more of a vanilla gamer.

I have created maps of cities, roads, countries, and even the entire map of ETS2. For ATS, I mostly do road maps. Here are some of my maps I created in the past:

Pernik was my first city map ever created in ETS2. This image was published on December 21, 2019.

İstanbul was my hardest city map created in ETS2 due to its shoreline in-game. This image was published on December 24, 2019 and was later updated by User:Krmarci on March 4, 2020.

The map of Interstate 15 was my first road map of ATS. I updated the image to another version prior to the release of the Idaho DLC on April 11, 2020. (You're seeign the current version of the map. See more details in [File:Interstate 15 map.png]. 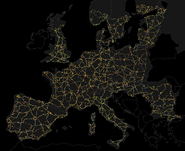 The full map of Euro Truck Simulator 2 is currently my biggest map ever created. I have created this image with a hand-full of screenshots of the map in ETS2, and I have edited all the screenshots into one image.

These images have been found in the game files. If you're looking for the image you need, they're right here: