Tucson is the second largest city in Arizona. It is featured in the Arizona map expansion DLC for American Truck Simulator.

The most important landmark of Tucson is the secret Truck Racing circuit. It is located to the west of the Bitumen roadworks and it is not shown on the map, why one could call it an easter egg.

The city is split up in two parts by the Interstate 10:

The main part includes a Bitumen depot, a Gallon Oil refinery, a Plaster & Sons depot and a Wallbert warehouse. There are also two gas stations, a garage, a service shop and a recruitment agency.

The other part, which is located to the south of the I-10, consists of a Charged market, a Wallbert and a Volvo Truck Dealer with a service shop.

A Bitumen roadworks is located to the west of the city, but it is hard to get there because the road is full of obstacles. The Truck Racing Circuit can also be found in this area.

Tucson is connected to other cities by three highways:

In update 1.32, a Volvo truck dealer was added. 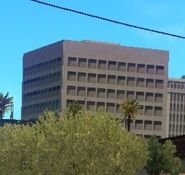