The Dalles is a city featured in the Oregon map expansion DLC for American Truck Simulator.

There are Bushnell Farms, Home Store, Plaster & Sons, Rail Export, Steeler, and Sunshine Crops depots in The Dalles. A gas station with parking can also be found in The Dalles.

In addition, a viewpoint is loacted in the center of the city.

In update 1.40, a viewpoint was added in the center of the city. 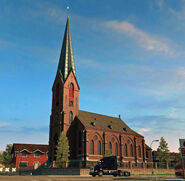 Retrieved from "https://truck-simulator.fandom.com/wiki/The_Dalles?oldid=95291"
Community content is available under CC-BY-SA unless otherwise noted.