Sacramento is the capital city of California. It is featured in American Truck Simulator.

The known landmarks in Sacramento are the Sacramento River, the Tower Bridge, the Capital Square, the Courthouse and Federal Building, and the Wells Fargo Center.

In this city, there are a Bitumen depot, Plaster & Sons construction area, a Wallbert store and two Wallbert warehouses.

In addition, there are a Mack truck dealer, a Gallon Oil gas station, two motels and a service shop. There is also a garage which the player can purchase.

A Bitumen roadworks and a Sunshine Crops farm can be found to the north of Sacramento.

The city is located on the intersection of the IS5

. I-5 runs to Stockton and Los Angeles to the south and Redding and Oregon to the north. I-80 runs to Oakland and San Francisco to the southwest and Truckee and Reno, Nevada to the northeast.

In addition, the CA37

runs from I-80 west of Sacramento to San Rafael.

In update 1.41, a Sunshine Crops farm was added to the north of Sacramento. 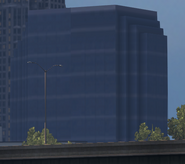 Bitumen
Add a photo to this gallery

Retrieved from "https://truck-simulator.fandom.com/wiki/Sacramento?oldid=95573"
Community content is available under CC-BY-SA unless otherwise noted.