Oslo is the capital and the most populous city in Norway. It is featured in the Scandinavia map expansion for Euro Truck Simulator 2. Just like many other cities included in that DLC, Oslo has a very large footprint and sophisticated road layouts.

There are four clusters of facilities regarded as part of Oslo in the game. Depots are denoted in bold.

Oslo is the hub of Norwegian transport network in the game. 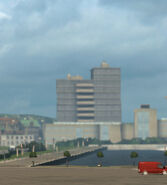 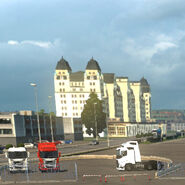 The Norrfood and IKA depots