Oregon is a state of the United States, which is featured in American Truck Simulator as a map expansion DLC. It was announced on February 1, 2018 to celebrate the game's second anniversary and was released on October 4, 2018. It is the third map of DLC involving map expansions, but the second paid one.

The state is bordered by the Pacific Ocean to the west, Washington to the north, Idaho to the east, Nevada and California to the south.

Oregon is on the West coast of the United States south of Washington state and north of California and Nevada. To the west is the Pacific Ocean and to the east is Idaho. The state is separated from Washington by the Columbia River for much of the border.

The state is most easily divided between east and west. The Cascade Range, which stretches from southern Washington to California, splits the state from north to south.

The western portion is mostly lush forested land with the Willamette Valley taking up much of the state's population. The Oregon coast is known for its rugged coast line and large amounts of rain. The largest city in the state by population is Portland, located along the border with Washington.

The eastern portion is dry scrubland that varies to desert the closer one gets to Nevada and parts of Idaho.

There are 14 cities in the Oregon Map Expansion.

Note: Salem is in italic lettering since it is the state capital of the state of Oregon.

Suburbs on this wiki are defined as separate cities in real life that are shown as part of larger cities in game.

Scenery towns on this wiki are defined as cities or communities that are unmarked on the map.

Many new industries like logging or furniture are introduced with this DLC.

With the new DLC, truckers are able to deliver the whole "chain" of a log's manufacturing.

With the Oregon DLC, SCS made prefabs for real life locations like a port on Swan Island (Haddock Shipyard).

The Oregon Map Expansion features many truck stops that are recreated from ones in real life.

There are six Interstate Highways in Oregon:

There are nine US Highways in Oregon:

There are 11 Oregon State Routes in Oregon: 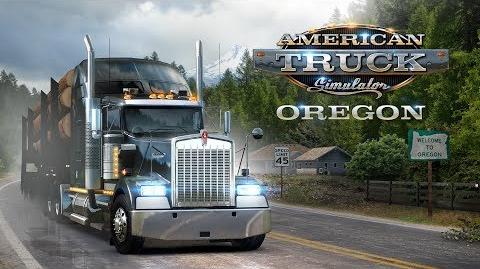 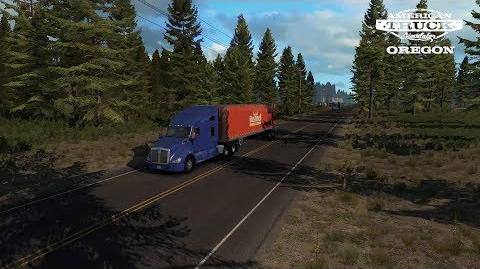 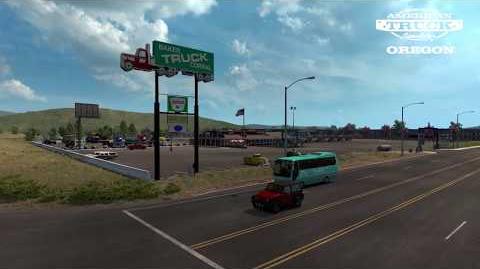