The Milano Metropolitan Area is a metropolitan area located in northern Italy, featured in Euro Truck Simulator 2, and includes the city of Milano and 3 small cities around Milano. It developed to its current state with update 1.30.

The known landmarks in Milano were the Breda Tower, the Cathedral, the Centrale railway station, the Galfa Tower, the Orio al Serio Airport, the Palazzo Lombardia, the Pirelli Tower, the San Siro Stadium and the Velasca Tower. There are four other towers, which are not identifiable.

The only remaining landmarks after the update are the Gemini Center, the Orio al Serio Airport and the Railyard. Some of the new landmarks are the Viadotto Expo 2015 and the Linate Airport. 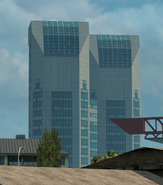