Köln (English: Cologne) is a city in western Germany, featured in German Truck Simulator and Euro Truck Simulator 2. It is the southernmost of the three-city chain in both games, with Düsseldorf and Duisburg being the other two cities in the chain. In addition, Dortmund and the Belgian city Liège are also very close to Köln.

The known landmarks of Köln are its famous Cathedral, the Cologne Tower, the Colonius TV tower, the Great St. Martin Church, the Kölntriangle and the Lanxess Tower. In addition, there are three bridges crossing the Rhine in Köln, of which only the Rodenkirchen Bridge is accessible in the games. The other two are the Severin Bridge and the South Bridge.

Köln only features depots of ITCC and Posped; meanwhile a garage, a hotel, a recruitment agency and a service shop are present in Köln.

passes the city to the south. To the west truckers may cross the Belgian border and reach Liège, or go north via the A61

towards the Dutch border. To the east the autobahn meets the A45

, which links Osnabrück and Frankfurt am Main. 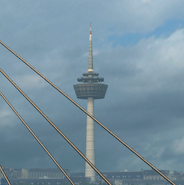 Weisweiler power plant
Add a photo to this gallery

Retrieved from "https://truck-simulator.fandom.com/wiki/Köln?oldid=89019"
Community content is available under CC-BY-SA unless otherwise noted.