The country is bordered by Denmark to the north, Poland and the Czech Republic to the east, Austria and Switzerland to the south, and France, Luxembourg, Belgium, and the Netherlands to the west.

Because of its central location, the country received significant attention from both players and SCS itself. Germany was the first country to officially receive a map rework without being featured in a DLC[1].

History in the Truck Simulator series[]

Inclusion of Cities and Towns[]

Berlin, Frankfurt, and Munich were included in the original Euro Truck Simulator.

15 more cities were included in German Truck Simulator, and another 3 (Kassel, Mannheim and Osnabrück) in Euro Truck Simulator 2, bringing the total to 21.

Travemünde was added in version 1.33 update. Its main feature is a port for connections across the Baltic Sea to Beyond the Baltic Sea DLC area, specifically Helsinki and Liepāja. 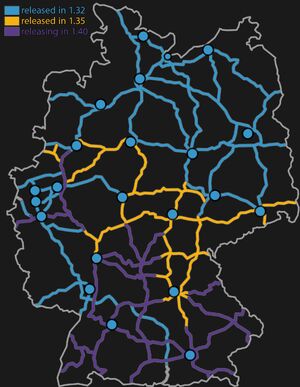 On May 23, 2018, SCS announced their intention to rework old areas of the base game map, with Germany being the first.

The first part was released in version 1.32 update. All existing German cities, and some German intercity roads (mostly in northern Germany) were reworked[2]. (As mentioned above, Travemünde was officially released in the next version)

The second part was released in version 1.35 update[3], and includes mainly the area around Nürnberg (which is itself re-rendered), Erfurt and Kassel. Two new Autobahns were also added, specifically A38 (Kassel to Leipzig) and A71 (A38 to A4).

The third part (and also the final phase of the Revisiting Germany) was released in version 1.40 update[4]. Dortmund was relocated to the "correct side" of A1 and A45, the area around the cities of Dortmund, Köln, Düsseldorf, and Duisburg was redesigned but a few new intersections and roads were added in the place as well, and Stuttgart was featured a new airport area. The southern part of A7 was also added.

Germany was the country with highest number of cities featured in ETS 2 (22), before the Vive la France DLC allowed France (31) to snatch the title.