Düsseldorf is a city in western Germany. It is between Köln and Duisburg, which form together with Dortmund the Rhine-Ruhr metropolitan region. The city is included in German Truck Simulator and Euro Truck Simulator 2.

Düsseldorf has been reworked in the 1.32 update.

Düsseldorf is the city with the most landmarks in the whole base game of ETS 2. One can find there the Colorium, the Josephskapelle, the Neuer Zollhof buildings, the Oberkasseler bridge, the Polizeipräsidium, the Portobello building, the Rheinknie bridge, the Rheinturm, the RWI4 towers, the Schlossturm, the St. Lambertus church, the Stadttor, the Tonhalle, the Victoria building and the Vodafone tower.

Because of Düsseldorf is located very close to other cities, there are only three companies: EuroGoodies, Stokes and FCP.

Other facilities in Düsseldorf are a garage, a hotel, a service shop and a small Renault truck dealer.

All accesses to Düsseldorf are minor or unnumbered roads.

near Dortmund. Two minor roads branches from it: Both run south to Köln and the A4

Another small road links Düsseldorf directly with Duisburg. Along this road, one can find a gas station. 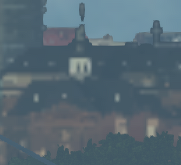