Albuquerque is a city featured in the New Mexico map expansion DLC for American Truck Simulator and in 18 Wheels of Steel series.

The landmarks of Albuquerque which can be visited in American Truck Simulator are the ABQ airport, the Big I and the Rio Grande, as well as the Bank of America Building, the Bank of the West Building, the Barnalillo County Courthouse, the BBVA Compass Bank Plaza, the Crown Plaza Fairfield Inn, the Dennis Chavez Federal Building, the Embassy Suites Hotel, the Encino Terrace, the Heart Hospital, the Heart Institute, the Hilton Garden Inn, the Home2 Suites, the Hyatt Regency, the Loveland Medical Center, the Marriott Pyramid, the Marriott Hotel, the New Mexico Bank and Trust Building, the New Mexico Courthouse, the One Civic Plaza, the Pan American Building, the Plaza del Sol, the Presbyterian Hospital, the Scientific Laboratories, the Two Park Square, the University Towers, the UNM Cancer Center, the US Eagle Plaza, the West Fargo Bank Building and the Whitener Building.

The city is split up in several parts of which only few are directly connected among themselves:

In update 1.39, a Coastline Mining depot was replaced by a NAMIQ depot before the release of the Colorado DLC and a Ultimus cargo plane was added.

Bank of the West Building 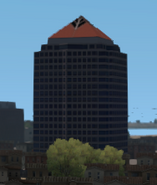 Whitener Building
Add a photo to this gallery

Add a photo to this gallery

Retrieved from "https://truck-simulator.fandom.com/wiki/Albuquerque?oldid=86021"
Community content is available under CC-BY-SA unless otherwise noted.